Had some fun yesterday with a little project that I had been putting a side for too long. I’ve owned a few computers and laptops in the past years, and my Dell XPS L502X is by far the toughest and best laptop I’ve purchased so far (bought new in 2011). This machine was subjected to many difficult environment since it was used as a DJ laptop (clubs, outdoor & indoors events, parties, etc.) and my everyday computer as well. Now I use this laptop mainly for my music and internet browsing, but it’s still powerful and fast enough for much bigger tasks.

Overtime, I noticed my CPU fan was always running high, even when the system was idling. And I was also having a few issues with 1 USB port on the back. So I decided to venture into cleaning and replacing the following : 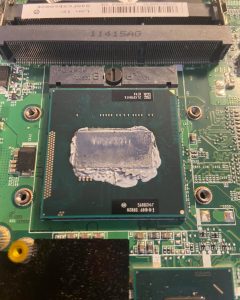 After I’ve successfully disassemble my Dell XPS L502X, I immediately notice the dust on the heatsink and fan, which was expected with a 10 year old laptop. But what really surprised me was the amount of thermal paste remaining on my CPU after removing the CPU/GPU heatsink.

Almost all the original thermal paste (from Dell) was melted off the CPU Chip, obviously causing my high temps and making my CPU fan running high all the time.

So here was the repair process in order :
Assemble back the laptop and voilà! … No CPU Fan noise after booting up the laptop. SUCCESS! 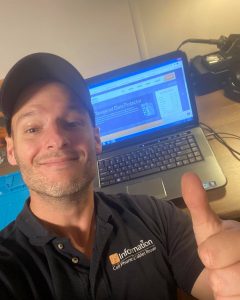 After monitoring my CPU temps, I’ve notice a drop of 15-20 degrees in heat while processor is idling, which is excellent. The new CPU Fan, USB I/O Board are working without any issues and my Memory Upgrade has given the laptop a very noticeable speed boost.

Got issues with your old PC or MacBook fans running full speed all the time? You might need a new thermal paste job done by JS Information!